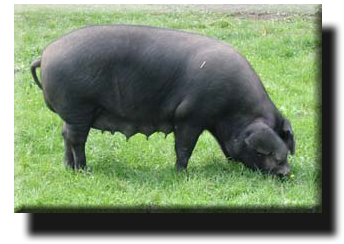 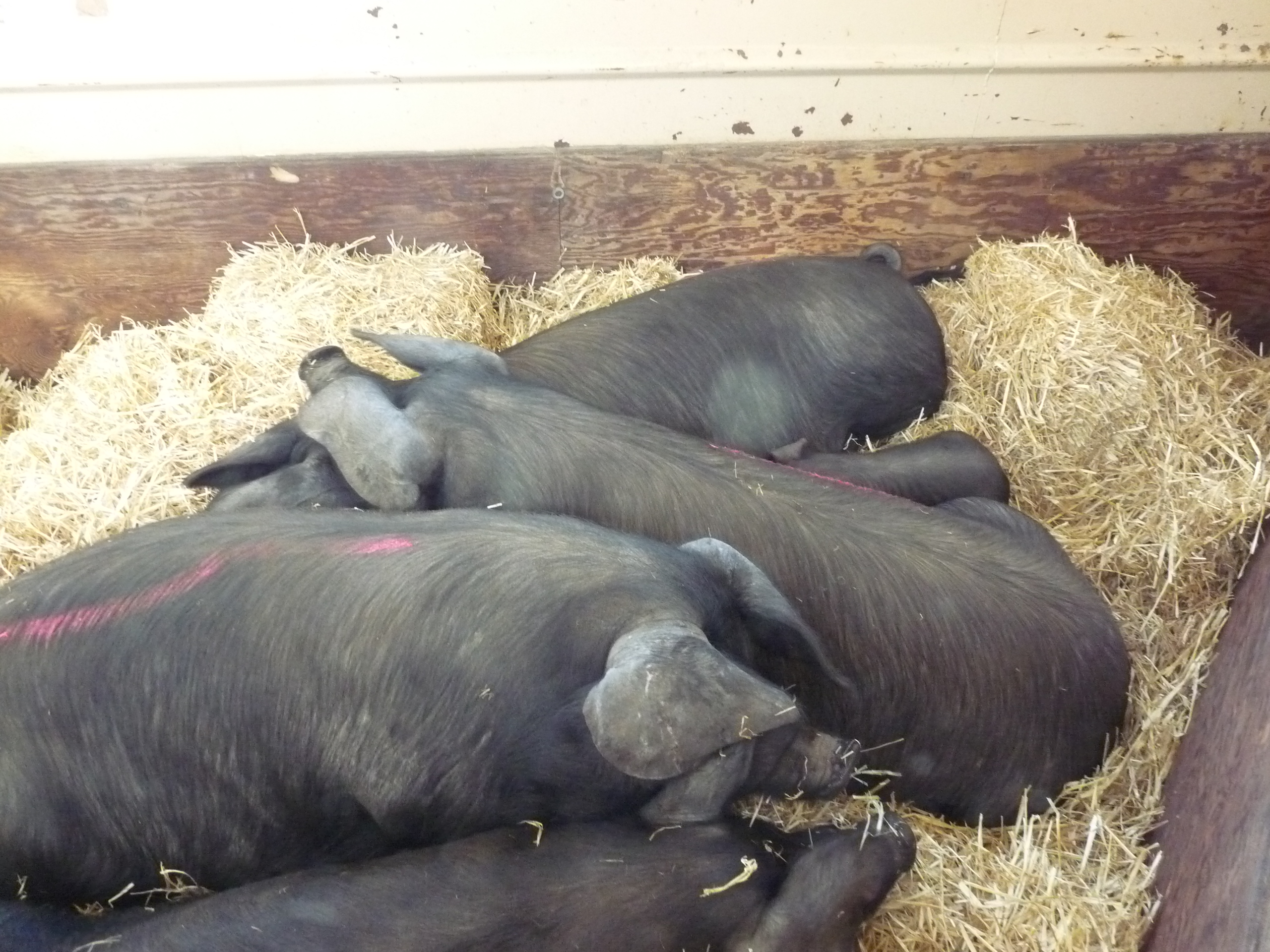 Learn about The Large Black Hog

What is so special about the Large Black Hog? Perhaps the most important thing about Large Blacks is their pedigree. These are "HERITAGE HOGS". They retain the traits of their ancestors that lived on the pastures and woods of England in the 16th and 17th centuries. They are hardy animals able to handle the cold and heat. They can effectively convert pasture and goodies found in your woods into nutrition. Great mothering ability; good sized litters; longevity.

Despite their large size they are well known as very docile hogs.

Their dark coloring makes them more resistant to sunburn. And their pork might be the best available; micromarbled and deliciously Old World flavor. If you enjoy living a natural life and want to have livestock that reflects your desire for healthy animals, living in a natural environment, then Large Black hogs are the ones for you! If you like the idea of being part of a larger movement dedicated to the preservation of rare breeds, then a natural choice is Large Black hogs.

There are currently around 800 registered Large Black hogs in the United States, a fraction of the number needed to ensure the long term health of this breed in the U.S. Our members are working very hard to increase the numbers, improve the individual hogs and conserve the critically necessary genetics of this heritage breed of hogs. We welcome you!

A Bit Of History

If you had a large, black pig, what name would you give it? Well, when the first breed society was developed in England, they decided to keep it simple and called them Large Black hogs. They became very popular on small farms because they were docile, easy to keep and got much of their nutrition from the grass and forage provided by nature. Originally there were two distinct breeds in England; one in the east and the other in the west. One had dense, long hair and the other had short, thin hair. Todays pigs show both traits even within the same litter. The hogs were imported into the United States early in the twentieth century and did well on a number of farms. However, in the 1960s when the pork market started to favor leaner, lighter colored meat the marbled pork of the Large Black fell out of favor. By the 1990?s the Large Black pig had become critically endangered. Today it is listed as Vulnerable by Englands Rare Breeds Survival Trust and Critical by the American Livestock Breeds Conservancy.

Now, while we are proud of our efforts in the Americas to improve the breed, we are really amateurs compared to our friends in the U.K and Australia. So lets hear from the pros:

From the British Pig Association: With its lop ears and long, deep body, the Large Black is Britains only all-black pig. Extremely docile, and very hardy, it is ideally suited to simple outdoor systems. These characteristics, coupled with its black skin, make the Large Black ideal for a wide range of climatic conditions. In fact, by 1935, pigs of this breed had been exported to well over 30 countries.

The breed originates from the Old English Hog established in the 16th and 17th centuries. Described by Parkinson in 1810: They are distinguished by their gigantic size, they are the largest of the kind I have ever seen, and as perfect a make as possible in pigs; their heads are large, with very long ears hanging down on each side of the face, so they can scarcely see their way. By the late 1880?s there were two distinct types of Large Black, one to be found in East Anglia and the other in Devon and Cornwall. However the founding of the Large Black Pig Society in 1889 led to an increase in the exchange of stock between breeders in the two regions.

In the early part of the 20th Century, Large Blacks were widely distributed throughout the country and were frequently crossed with Large Whites and Middle Whites to produce bacon and pork pigs. The Large Black breed was also very successful in the show ring at this time; at Smithfield in 1919, the Supreme Championship was awarded to a Large Black sow that subsequently sold for 700 guineas. The same year the breed outnumbered all other breeds at the Royal Show when 121 Large Black pigs were exhibited.

A change in demand by the meat trade and a developing prejudice against coloured pigs led to a severe decline in numbers throughout the 1960?s.Today Large Blacks can be found throughout the British Isles, mainly in small herds, some of which were established well before World War II. Large Black sows are renowned as excellent mothers with exceptional milking ability. They are able to rear sizeable litters off simple rations and a placid temperament ensures they can be contained behind a single strand of electric fencing.

Current demand for meat produced from traditional breeds of pigs raised extensively is now promoting a growth in the number of breeders keeping Large Blacks as this particular breed is much appreciated for its succulent taste and eating quality.

Currently the breed has 6 boar lines and 24 sow lines.

From the Large Black Pig Breeders Club: They are distinguished by their gigantic size, they are the largest of the kind I have ever seen, and as perfect a make as possible in pigs  their heads are large, with very long ears hanging down on each side of the face, so they can scarcely see their way Parkinson 1810

Origins: One of this countrys oldest pig breeds, the Large Black had its origins in the Old English Hog of the 16th and 17th centuries. By the late 1800s the main strongholds of the breed were in East Anglia and Devon and Cornwall, and two distinct types of pig were produced. The founding of the Large Black Pig Society in 1889 led to an increase in the exchange of stock between the breeders in the two localities.

In the early part of the 20th century Large Blacks became more widely distributed, and were frequently crossed with the Large Whites and Middle Whites to produce both porkers and baconers. The Large Black enjoyed considerable success in both the Show and Sale ring. At Smithfield Show in 1919 the Supreme Championship was awarded to a Large Black sow, subsequently sold for 700 guineas. In the same year Large Blacks outnumbered all other breeds at the Royal Show, with 121 being exhibited.

From the Rare Breeds Trust of Australia: An English breed, the Large Black was concentrated in the eastern counties and the west country. It resulted from the amalgamation of small, hardy, prolific stock from East Anglia and Sussex and large bodied specimens from Devon and Cornwall. Bryer Jones, writing in Live Stock on the Farm (1915) points out that both types were slow to fatten, were of a poor meat shape and generally lacked quality. Infusions of Chinese and Neapolitian pigs  used already to improve Berkshire and Whites  introduced the commercially viable characteristics the regional black types lacked.

The Large Black of pre-exhibition days was long in body and on the legs, too high off the ground, too flat-sided, and furnished with ears of great size. The hair was, we believe, abundant but coarse, the meat leaner than now and the process of fattening longer. (1) When numbers of the Essex, Suffolk and other black pigs from East Anglia dropped so low as to be unsustainable, the remaining specimens were amalgamated with the west country pigs; subsumed into the Large Black Herd Book and all examples of the breed since have been Large Blacks. (2)

The Large Black Pig Society of England was set up in 1899. A trademark in the form of a shield with the initials LBP was instigated in 1902 along with a breed booklet. There has been a remarkable development of desirable points and grading up of the poorer types, with an eye to meet all the requirements demanded by butchers and bacon curers today, viz a wealth of lean flesh free from coarseness and a wonderful length of side to yield prime interlean bacon, in other words size with quality. (3) Its important to remember that many animals had been large and coarse with a lot of bone, including thick bony shoulders. Many were also inclined to be gutty with a rounded uneven back and general lack of depth. 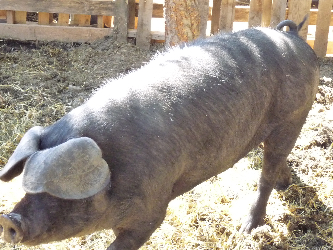 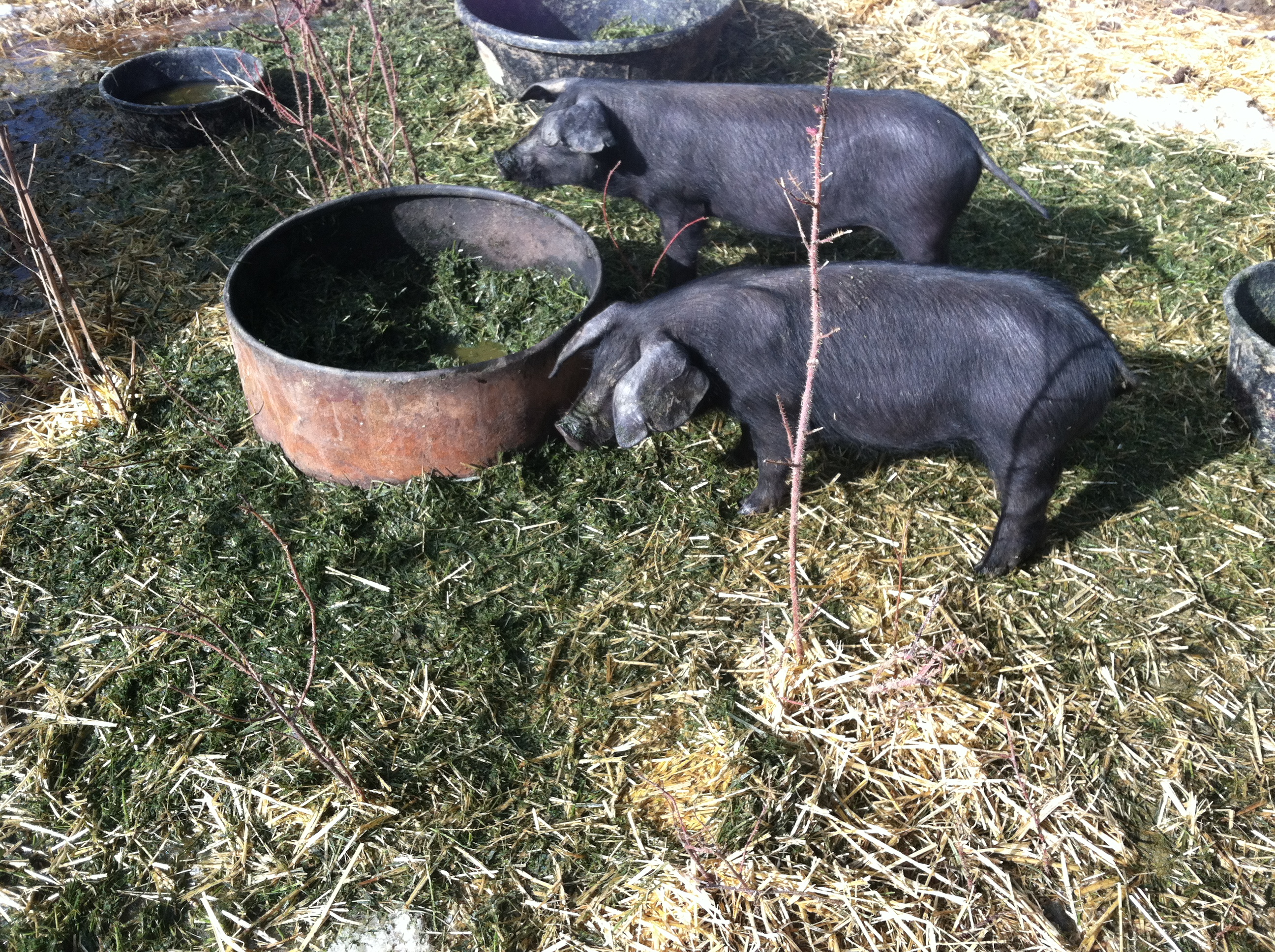 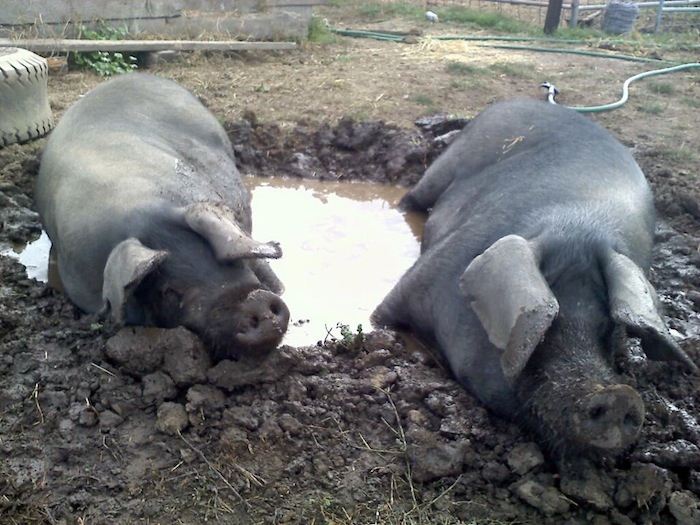 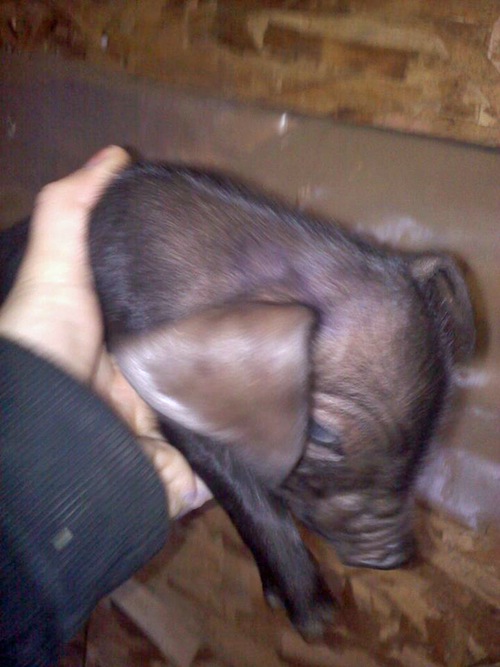